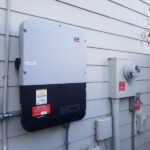 Designed and built in Germany, SMA inverters are reliable and efficient. SMA’s current series of inverters have an optional daytime Secure Power Supply feature which provides one 15 amp circuit to power 120V loads during daytime power outages. A monitoring feature also allows users to monitor their system via the Sunny Portal with an additional interface. 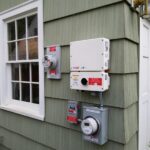 We are proud to offer SolarEdge inverters with DC optimizers as an option to our customers. One of the most significant recent developments in the solar industry has been the use of individualized DC optimizers and micro-inverters.  Abundant Solar offers the Solar Edge system that uses DC optimizers. This system has significant advantages over traditional series string inverters in areas where partial shading of the array occurs. With a series string inverter, modules are wired in one or more “strings” of modules. If one of the modules in the string becomes shaded, the output of the rest of the modules in the string is reduced. With the Solar Edge system every module has a separate Dc optimized circuit that is not affected by other modules on the string. Shading one module in this scenario will have no effect on the other modules in the array. The other major advantage of the Solar Edge system is web-based monitoring of each individual module in the array. The DC optimizers communicate with the main inverter unit via the DC wiring from the array. Solar Edge optimizers have a 25-year warranty and the inverters have a 12 year warranty.  SolarEdge also offers electric vehicle charging inverters and an Energy Hub feature which allows homeowners to track whole house energy consumption and generation.

To learn more about the systems we use to get you up and running on solar power, click on the following product pages: