Grid-tied with battery back-up systems are becoming more popular as emergency preparedness has become a high priority for many people. Most grid-tied with battery back-up systems have a dedicated back-up loads panel that is powered by the batteries during an outage. Common residential loads placed in the back-up panel are well pump, refrigerator, freezer, lights, communications, furnace blower (for gas or pellet stoves) and a few strategic receptacles. Larger loads like electric heat, electric water heater (some heat pump water heaters are okay), electric range, electric dryers and ducted heat pumps are excluded from back-up as they drain batteries too quickly. During a long-term power outage, low electricity heat sources such as wood or pellet stoves, gas furnaces and ductless heat pumps (depending on size) are used to conserve back-up power. Small induction cooktops, microwaves and other fast cooking small appliances are good ways to cook food with electricity from a back-up system. Fossil fuel generators can be incorporated into back-up systems to charge batteries and power back-up loads during an outage with low solar input. Grid-tied with battery back-up systems are currently about double the cost of a grid-tied only system. 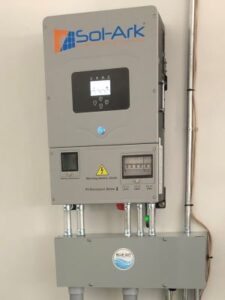 Veteran-Owned and operated Sol-Ark is a Texas-based company making inverters that are “the Swiss army knife” of the solar inverter world. Their inverters can be installed with or without batteries and can power back-up loads during an outage, control input from a generator to charge batteries, and communicate with many popular Lithium battery BMS units to display state of charge and follow charge parameters set by the battery BMS. In our opinion the most impressive features are: 1) 20,000 watts surge capacity (for starting pumps and other high inrush current equipment) 2) Touch Screen display, 3) built-in battery charge controller 4) Can AC-couple to existing Grid-tied system to provide back-up power 5) Remote viewing and control of inverter performance and settings. 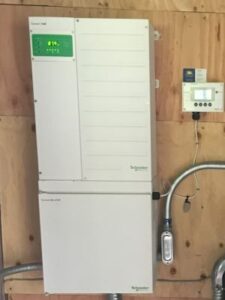 The Schneider XW Pro series inverters follow in the footsteps of the Xantrex XW inverters which are rock-solid performers in the back-up and off-grid solar world.  Our shop is powered by a Xantrex XW6048 that was installed in 2010.  It has performed flawlessly since installation and provided grid-tied and back-up power all these years. Like all of our Schneider installations, we haven’t had to service the inverter since installation. The things we love about Schneider XW inverters are: 1) Long-term reliable performance with large company warranty support (less likely to go out of business) 2) Remote viewing and control of inverter performance and settings 3) Double inverter rating surge capacity (for starting pumps and other high inrush current equipment), 4) Easy generator integration 5) Can AC-couple to existing Grid-tied system to provide back-up power 6) Supports and communicates with many modern Lithium battery BMS units.

Click on your utility provider below to see an example cost breakdown of a net metered system.